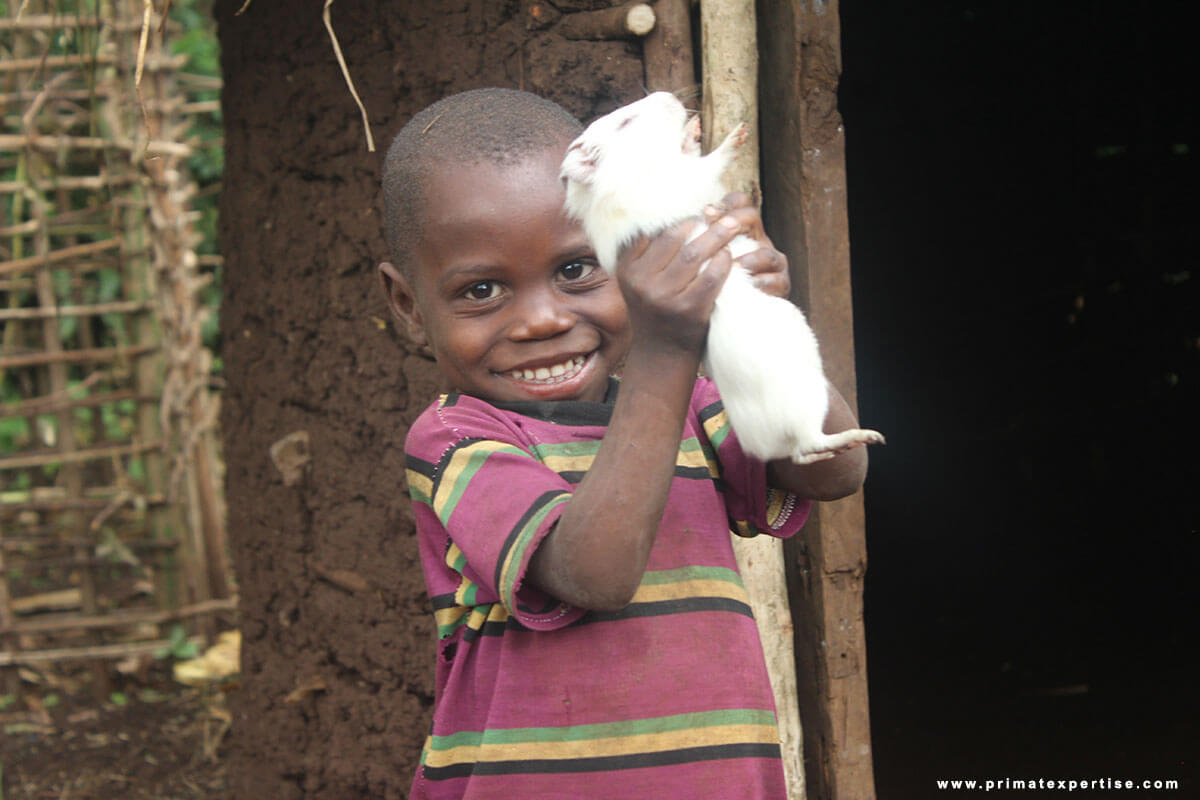 In its Community Conservation Program for the Protection of Graueri Gorillas, PEx offers animal protein alternatives to vulnerable communities living around gorilla habitat in Kahuzi-Biega National Park to reduce their poaching activity which threatens the park biodiversity, and jeopardized the life of the gorillas. Primate Expertise has benefited from Wild Earth Allies grant to implement this activity. The activity consists of the breeding of guinea pigs associated with the development of vegetable gardens in 2 pygmy villages around the Kahuzi Biega National Park (Buyungule and Chahoboka) to reduce pressure on resources of the natural environment of the Gorillas.

Started in 2018, this project aims to improve the socio-economic conditions of the Pygmy people by supporting the income growth of 100 vulnerable Pygmy households.

During this first phase of the project, 4 pygmy leaders including 2 men and 2 women considered as educators for households were trained on the techniques of raising guinea pigs by a local veterinarian.

Protein intake from guinea pigs in  pygmy households, particularly for children and women, is decreasing the consumption of game from the natural habitat of non-human primates.

In addition, by searching for fodder for guinea pigs, pygmy children stop wandering in Bantu’s fields; they are no longer involved in the theft of crops, which reduces conflicts between Pygmies and Bantu.

Figure 1: Smile on the lips and a guinea pig in hands: a good meal is expected here in Chahoboka.

The pygmy children are delighted to see the rodents on which they have full access. Project nicknames were given to children as a thank you. This is the case of the son of Buyungule’s pygmy chief, nicknamed BASABOSE, named after PEx Executive Director, as he left the maternity on the day of the guinea pig’s distribution for the first time in this village.

Household guinea pigs provide protein, money after sales in local markets and ensure social cohesion between pygmies and Bantu. Applying guinea pig manure greatly increases crops yield in the fields lent by the INERA-Mulungu National Institute of Agronomic Research to reduce the conflicts related to fights previously perpetrated by pygmies in Bantous farmers. In short, this small prolific rodent that the rearing may be conducted at a low cost, has a good nutritional and socio-economic potential and it should be extended to other vulnerable beneficiaries among Bantu communities.

Figure 3: Mr. Cokozi Kembe one of the beneficiaries in guinea pigs surrounded by his children in his house at Buyungule village.

The second part of the project set up two pilot community gardens as part of family farming; near their huts, the beneficiaries set up 95 vegetable gardens to supplement household income through the sale of food and crops.

Based on this experience and its results, PEx intends to expand the activities of this small farm associated with agriculture and at the same time introduce pork farming with a much more consistent benefit in the perspective of reducing the anthropic pressure that great primates of the PNKB in the Democratic Republic of Congo.

In the view of extending agricultural activities to combat food insecurity in vulnerable communities bordering the Park, PEx supported 86 pygmy women with more than half a ton of bean seeds; however, the needs remain enormous to sustain their resilience and out of begging and dependency.